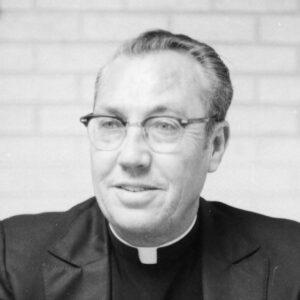 The Claretian Alumni Association honored Fr. Ernest Hyman CMF at the 2021 Reunion. The award is given in memory of a priest or brother impactful in the lives and formation of seminarians. Jose Blanco ’69, a member of the Alumni Council and a resident of El Paso, presented this tribute during the Reunion

When our family arrived to Dominguez Seminary, we were greeted by Fr. Hyman and the family met with him. My parents felt very comfortable with Fr. Hyman and when they left they told me that he was a true man of God and that I would be very safe and happy in the seminary. Fr. Hyman introduced me to Saul Torres, who was in his third year and from EL Paso, Texas. Saul told me that we would be woken up by a priest with announcement of “Deo gratias et Mariae” and we would respond with “Semper deo gratias et Mariae”. In the morning we were awaken by a giant priest, Fr. Hyman. Although he had the stature of a giant he was so gentle, kind, and compassionate.
Fr. Hyman was our biology teacher and he was very passionate about the creation of God. He made it very obvious that God was the intelligence of the world and the that scientist were always looking for the cause of everything. He described God as the un-cause of all causes. He was an excellent coach and athlete and demonstrated outstanding sportsmanship. He coached our freshman flag football team and we never lost a game.
Fr. Hyman selected three postulates from our class to pioneer a new seminary in Clayton California. He was so smart and a fair person. He passed out index cards to our class and told us to pick three classmates that we would want to be stationed with. Fr. Hyman picked 3 seminarians that he would take with him to St. Anthony Claret seminary. He asked me if I could report three weeks before other seminarians arrived to help him prepare for the opening of the seminary.
Fr. Hyman was so talented. Under his direction Bro. Stanford and myself, laid sod, built sidewalks, assembled furniture, mopped, and waxed the floors. Fr. Hyman even built an island for nesting in our pond for Mallard ducks would swim in the pond. The seminary was below Mt. Diablo and we had about 25 cows. Fr. Hyman taught me to drive a jeep, so he would wake me up at 0530 and both of us would go to our barn, pick up seven bales of alfalfa, loaded up on a trailer and take them up the mountain and spread them for our cows. He told me that would be one of my shores. Fr. Hyman taught me to drive a Volkswagen and got me a California license and he told me that Bro. Stanford and I would be driving the seminarians to school. Fr. Hyman was very good at delegating shores.
Fr. Hyman was a real cowboy and true grit. There were a lot of ranches around the seminary and on weekends the ranchers would get together to help each other with the cattle. Fr. Hyman would tell me to saddle the two horses we had, I felt sorry for his horse “Smokey” for Fr. Hyman was so big. At the ranches we help dehorn, brand, and castrate the calves. Fr. Hyman and the ranchers would cook and eat mountain oysters (calves testicles that were castrated). I never acquired a taste for them mountain oysters.
Fr. Hyman was a visionary. In September 1966 the Claretians open the third of their junior seminaries in the United States. St Anthony Claret Junior Seminary was experimental in its total concept and Fr. Hyman was the Rector. We lived in the seminary and attended school among lay classmates at De La Salle High School taught by the Christian Brothers in nearby Concord California. An all girls’ high school taught by the Carondelet Sisters was across our high school. Fr. Hyman allowed us to engage in sports, extra-curricular activities, and attend mix activities to include dances at both schools. We were engaged in Cross Country, Track, Soccer, and Basketball teams. Fr. Hyman was very proud of us especially when we made the varsity teams, lettered, and won most valuable and most inspirational awards.
Fr. Hyman developed our minds, body, and spirit. He was very charismatic and a servant of the community. The Brothers, Sisters, and community loved this holy man. We all had an apostolate in the community. We were involved with the sick, elderly, orphans, and served mass when Fr. Hyman said mass in the prison. Fr. Hyman continued the tradition of the yearly barbeque and the community would attend.
In summary Fr. Hyman can be described as a true man of God, holy, and pious man, who had the stature of a giant but was so gentle, kind and compassionate. He had a passion for the creation of God, the birds in the trees, the fish in the sea, the beast in the fields. He was an outstanding teacher, coach, and motivator. Fr. Hyman was a real cowboy a true grit. He was a visionary, charismatic and true servant of God and the people.
Oh and before I forget he was an excellent delegator of chores.